Skip to content
Regardless of the deepening construction plan, protection devices must be provided between the production stage and the extension section, or the protective rock pillars (8~10m ) should be reserved , or artificial protection plates (4~8m ) should be constructed to prevent the accident. When lifting a container or other object, it will still ensure the safety of the staff in the lower section.
When using the plan to extend the depth from top to bottom or between the ladders, the rock pillar or the protection plate only occupies the part of the wellbore corresponding to the production lifting equipment; when other extension schemes are adopted, the full section of the wellbore is occupied.
The method of preserving the protective rock column is simple and can save materials, but it must be used under the condition that the rock is firm, dense, impervious to water and does not expand under water. A top plate should be placed under the rock pillar to prevent the rock from loosening.
Demolition of a protective rock pillar is a laborious and unsafe job, and production upgrades should be stopped. If it is a full-section rock pillar. Should be from the bottom up. Drilling or counter-welling in the center of the rock pillar to drain the water at the bottom of the well; if it is a non-full-section rock pillar, clear the water in the water and remove the partition wall, then set it at 1~1.5m below the production stage above the rock pillar . Temporary protection plate, in the auxiliary stage with a sealing plate, you can use the common method to remove the rock column from top to bottom. You can also use the deep hole blasting method to remove the rock blast from the rock column and transport it out by the auxiliary stage. It takes 3 to 7 days to dismantle the rock column. It takes 15 to 20 days to complete the installation of the wellbore and the rock column .
The structure of the artificial protection disc is horizontal, wedge-shaped, single-slanted, slip-slip, with wire rope buffer net and assembled.
The horizontal protection groove is simple to manufacture, easy to install and disassemble, and has a small height, but the impact resistance is small, and it is suitable for lifting small and shallow well conditions. Commonly used buffer layer materials are wood bundles, hibiscus, bamboo bundles, sawdust bags, and slag. Sand and so on.
The slip-proof protection disk is developed on the basis of a single-slant protection disk. It is to cut a small inclined wall on one side of the wellbore. The lifting container falls on the swash plate surface and slides into the alcove, so that most of the kinetic energy generated by the fall is absorbed by the alcove.
The utility model has the advantages of simple structure, strong impact resistance, and is suitable for deep wells and large capacity lifting containers.
The wire rope buffer net protection disk is a layer of wire rope buffer net above the horizontal protection plate to reduce the impact of the falling object. The wire rope is fixed and tensioned into a mesh by 12 anchors evenly arranged , and the intersections are fastened by a rope card. The protective disc has a simple structure, good cushioning performance, and can save a large amount of steel, and can be used under normal conditions, but further measures to prevent the steel cord net from being punched through need to be studied.
When designing the horizontal protection plate, the specifications of each part of the protection disk can be pre-selected, and then the specifications and layers of the disk beam can be checked according to the impact kinetic energy of the falling container. The calculation principle is as follows: When the falling container hits the buffer layer, it deforms and loses part of the kinetic energy. The remaining kinetic energy after the collision vessel, useful work in a destruction of the protective plate in the form of steel beams, it should be less than the potential energy of the beam can be absorbed by the disc, to ensure that the gold beam from destruction, the safety factor is not less than 3. 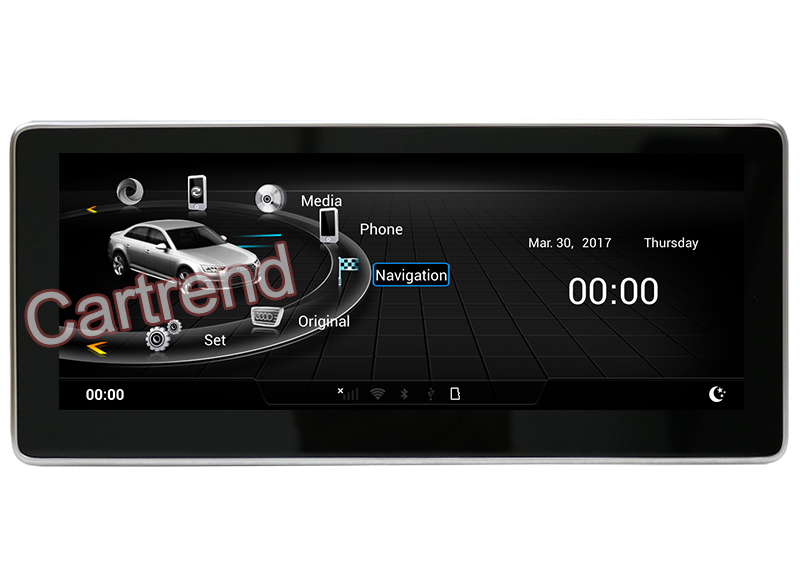 The Audi Android player provides same plugs and cables as that of original car. The installation is simply plug and play. You don`t have to cut original car cables. Cartend Audi touch screen is applied for car models such as A4L, A5, A6, A3, Q5, Q7.