In 2013, Cui Lefu, who was a teacher in Beijing, bought a JAC pure electric vehicle I-EV3 in Hefei because Beijing could not buy a JAC electric vehicle. When he transported the car back to Beijing, he had to land his car in Langfang, Hebei. â€œI checked the Beijing Environmental Protection Catalogue. I-EV3 entered the list. It should be possible to have a license, but there is no reason for it to be provided by the vehicle management agency.â€ said Cui Le.

Local electric vehicles are not subsidized locally by local governments and are not licensed. Similar situations are common in the country. In consideration of the protection of local businesses, most cities have implemented non-local manufacturersâ€™ electric vehicles with a discriminatory policy. While new energy vehicles are planned to be launched in 2010, the industry estimates that the government and enterprises will invest nearly 100 billion yuan, but it has not been able to solve the industrialization problem. Local governments have artificially split the market and are deemed to have heavy responsibilities.

The experience of BYD Auto, an electric vehicle manufacturer in China, closely reflected the crux of the development of electric vehicles in China. As a new energy automobile manufacturer, BYD enjoys the â€œspecial treatmentâ€ of Shenzhen and other local governments and obtains purchase orders and subsidies for financial support. On the other hand, BYD continues to suffer from the â€œmartyrdomâ€ of some domestic cities, so that BYD cannot Do not enter the local market by investing in factories.

On February 18, BYD Chairman Wang Chuanfu said in an interview with reporters: â€œBYD needs government support. This is necessary.â€ When talking about some citiesâ€™ discriminatory policies, Wang Chuanfu simply answered: â€œDare to be angry Words."

<br> <br> investment for the market in preparation for the 2014 Youth Olympic Games in Nanjing, Nanjing municipal government has proposed 650 pure electric buses BYD K9 orders requiring delivery before the end of June, the total orders for more than 1.3 billion yuan. Nanjing's procurement of BYD electric buses is considered to be the latter's move to build factories in the country. In 2013, BYD announced that it will build a new energy automobile plant in Nanjing with an investment of 3 billion yuan.

According to the new energy vehicle development plan formulated by ministries and commissions such as the Ministry of Science and Technology, the cityâ€™s pilot and demonstration operations will be carried out at an early stage. The central government and local governments will provide double subsidies for buyers. In the market, the main purchase of new energy vehicles is based on taxis, buses, and city bus companies in the public transport system, supplemented by a limited number of private buyers. Regardless of whether to obtain orders from public transport groups and passenger transport groups or obtain subsidies from the local government, it is necessary to â€œgetâ€ local governments.

It is worth mentioning that most local governments have established local new energy vehicle access standards, and these standards often differ from each other. Shanghai included the acceleration performance of 100 kilometers, and BYD E6 was excluded from it. The industry tends to think that this is a provision for E6 to protect local Shanghai electric vehicles. This means that buying BYD E6 in Shanghai can not get Shanghai local subsidies and a free Shanghai license plate.

How to eliminate the above barriers? BYD's approach is to build a new energy automobile factory in the local area.

"This is a very frustrating thing. If you don't build a factory there, you simply can't enter this market." A person close to senior BYD told reporters.

BYD has already established three new energy vehicle manufacturing bases in the country, namely in Shenzhen, Xiâ€™an and Changsha. To enter more markets, BYDâ€™s investment and construction of Daewang is also spreading to Yunnan, Chengdu, Wuhan, and Guangzhou. Second-tier cities, and even some third- and fourth-tier cities, have also reported that they have ventured into the country. BYD's sales of new energy vehicles in 2013 were only 3,000, and the designed capacity was far greater than the actual output.

Distorted electric vehicle industry <br> <br> Cui music to buy electric cars built after a QQ group, most of the group of nearly 200 electric car owners to discuss the topic of electric vehicles in full swing every day, where do the lighting business concise Qingdao (A pseudonym) even bought 3 electric cars.

"After buying an electric car, all the petrol cars in the house are sold, and then an electric car is opened for each person," he said simply. "Whoever buys petrol cars is a fool. Unless you have long distances, you can use long-distance flights and trains."

The cost of car owners in Shanghai Ruiqi Electric Vehicle is â€œequivalent to monthly mobile phone bills.â€ Because electric vehicles have a simple structure, compared with gasoline vehicles, there are many maintenance costs after the car is bought. The prices of Ruiqi and JAC electric vehicles are mostly less than 150,000 yuan, minus the government subsidies, and the actual expenses of the owners are about 70,000 yuan.

With the low price and low cost of use, the demand for the electric car private market is heating up. However, under the influence of two levels of government subsidies and local protection, the electric car market was divided into a nearly closed fortress by a city, which also inhibited the purchase demand.

On the other hand, because the government has subsidy in both R&D and consumption, some companies are making electric vehicles to earn government money.

A chairman of a private electric car company in Nanjing told reporters that due to lack of government support, the company earned profit from the "outsourcing business" of state-owned enterprises most of the time. "We received a job a week before the Beijing Auto Show 2010. We demanded the conversion of a petrol car into an electric car. We changed it. Later, this car appeared on the Beijing auto show. The other side claimed that it was fully self-developed."

At the Global Automobile Forum held in Wuhan in 2013, Zhu Fushou, general manager of Dongfeng Motor, stated bluntly: â€œTaking special funds and subsidies from the government has become the sole goal of many auto companies. Whether it is connected with the market is not considered at all. â€

In this complex background, BYD chose the public transportation system as the breakaway route for electric vehicles. The market capacity of taxis and buses (including passenger cars) in China is 1.7 million, including about 500,000 buses and 1.2 million taxis, accounting for approximately 1.7% of China's total auto sales. Every year there is a certain percentage of purchases and new purchases.

Focusing on the public transport system, it can realize the turnaround of new energy vehicle business. Wang Chuanfu said that BYD and the local government are a â€œwin-win modelâ€ and BYD has obtained orders, which can reduce urban pollution and complete the â€œbeautiful Chinaâ€ emission reduction targets.

However, relying on the government to support the development of electric vehicles is not a long-term road. Wang Chuanfu did not answer this question.

Three years after the launch of the new energy policy, the supporting facilities such as charging piles still pose challenges for the start-up of the private market for electric vehicles. Due to the respective regulations of fire protection, property, and power companies, it is difficult to install charging posts in residential areas. In the demonstration area with few people, hundreds of charging piles are covered with thick dust.

"The current problem is that the government has too many problems to manage. If the market is let go, the market will adjust itself, and supporting facilities are not a problem at all," said a senior person in the electric vehicle industry.

For the difficulties and setbacks in the process of BYD's electric vehicle entering the market, Wang Chuanfu said nothing. "There is some sentiment, but China is the largest market in the world."

The clutch disc (driven plate/clutch plate) engine torque can be cut off and transmitted by engaging or disengaging from the flywheel.

Clutch discs adjust the vibration and noise of a car, thereby providing the most comfortable ride according to the car`s overall characteristics. The most prominent feature of clutch is the torsion phenomenon that reduces the unpleasant noise and vibration generated by changing revolution speed. 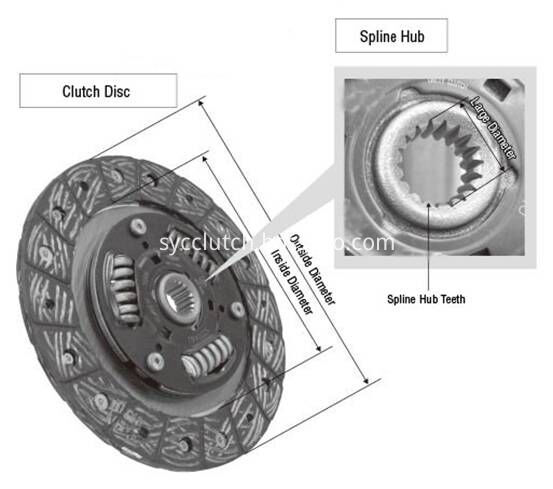